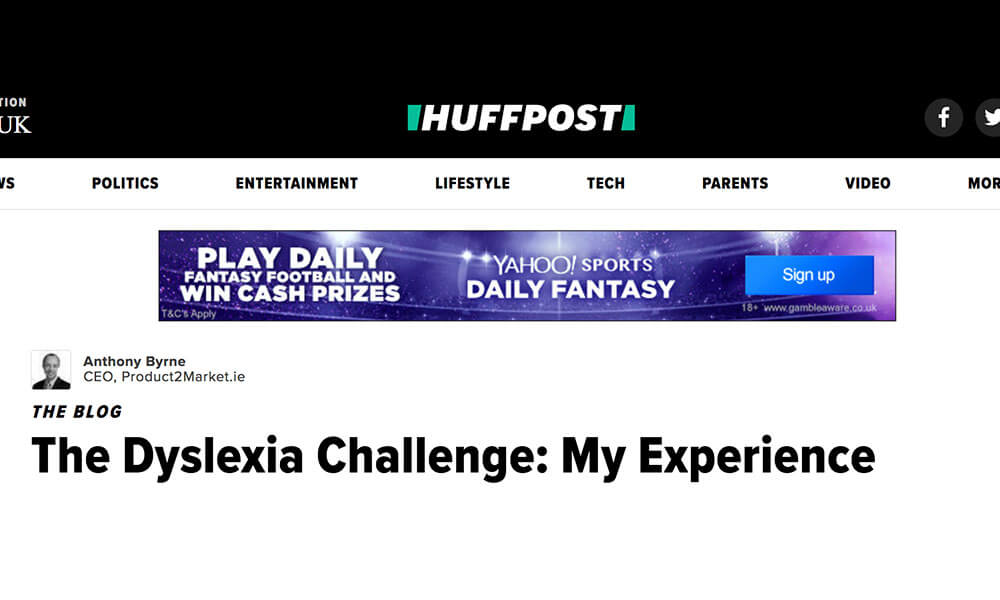 October is National Dyslexia Awareness Month (US) and every year friends, family and colleagues ask me what it’s like to be a Business owner with Dyslexia. First off, I always explain that I am in “good company” with many well-known, successful business people sharing the condition. Most people are surprised when I explain, that Dyslexia is quite common and it affects a wide section of the community. A number of recent studies have estimated that Dyslexia touches between 5 – 15% of the population in the US. Even today, the vast majority of people with Dyslexia don’t know they have the condition.

The truth is that I spent the early portion of my life wishing I wasn’t Dyslexic. I was born in Dublin in the 70’s, went to school in the 80’s. Back then any difficulty with reading and writing was viewed as a sign of low intelligence. When I think back at my school years, I can recall being frequently punished and excluded, because my writing and spelling wasn’t as strong as the other kids my age. I was 15 years old before I heard the term Dyslexia, or, even considered that some of us just learn and think differently. I recall how, back in school, I would devise tricks to try and cover up my Dyslexic manifestations. Some of these tricks have turned into traits and I have developed them to give me an edge in business and in life.

There is a growing body of literature and research around the concept of visual thinking. Visual thinking is something seen regularly to be stronger in people with Dyslexia. I remember in school the learning of non-phonetic words really was my biggest challenge. Trying to remember a sequence of letters without the word’s sound for direction always stumped me. I had a list of words that just for some reason I couldn’t get into my head, despite my greatest efforts to learn them by rote. I frequently flunked spelling tests and realised as a young man, I had to find a way around the problem. I started to have better success by developing relationships between the “difficult” words and the shape of everyday and abstract objects. I found that I was able to recall the images I associated with words quicker than the letters that formed the words. The process of constantly doing this day in and day out really expanded my way of thinking. It was from these experiences in school I realised that thinking independently and not following the other kids in class, can have rewards.

Always thinking about the relationships between shapes, numbers and words has really enabled me to develop a different outlook/vantage point on the working world, for which I am grateful. Over the years I have read articles from Dyslexics claiming that the condition is a gift, but I personally wouldn’t see it as quite that. I would have much preferred not to have stood out in school for being “slow” or “backward”. However when you are young and you have to work much harder than others in your class, just in order to keep up, one develops a resourceful and hard-working attitude, which is certainly useful in the business world and has stood to me over the years.

Today, education systems around the world have developed a rage of systems to identify Dyslexia in the young and have a very different attitude to learning disabilities to those I experienced in my school days nearly 30 years ago. There is still a lot of research being conducted in this area and much to be discovered about cognition and the how the brain processes information and I think there is a much better understanding and facilitation around Dyslexia on the part of the school systems

However I have to say, I think there are a number of positive elements to my own experience with Dyslexia. Mainly, I think the developing of my own way of learning in school fostered my values around “not following the crowd” and resulted in my developing confidence in my own ideas and independent thinking.

Today there are a number of widely available tools and resources to help people with Dyslexia. Also, the school system is more plugged into early detection helping children to learn in a variety of ways, not just the traditional. On my computers, I use a specifically designed typeface which is easier for people with Dyslexia to read. OpenDyslexia is a free to download/use a font that was designed from research into how the Dyslexic mind works and processes information.

So although I would have preferred to have been a “normal kid in school”, my experience with Dyslexia has given me certain attributes and attitude conditioning which has benefited and enriched my life as an Entrepreneur. And from the vantage point, I have as someone with Dyslexia, I really can see how the experience of the condition can really condition for Entrepreneurship.

Huffington Post Blog: “A Juice Fast for a Fast Life”

I would never have considered myself unhealthy, at least by today’s somewhat lax standards. I…

As part of our expansion plan, Product2Market did a small press and public announcement. We…