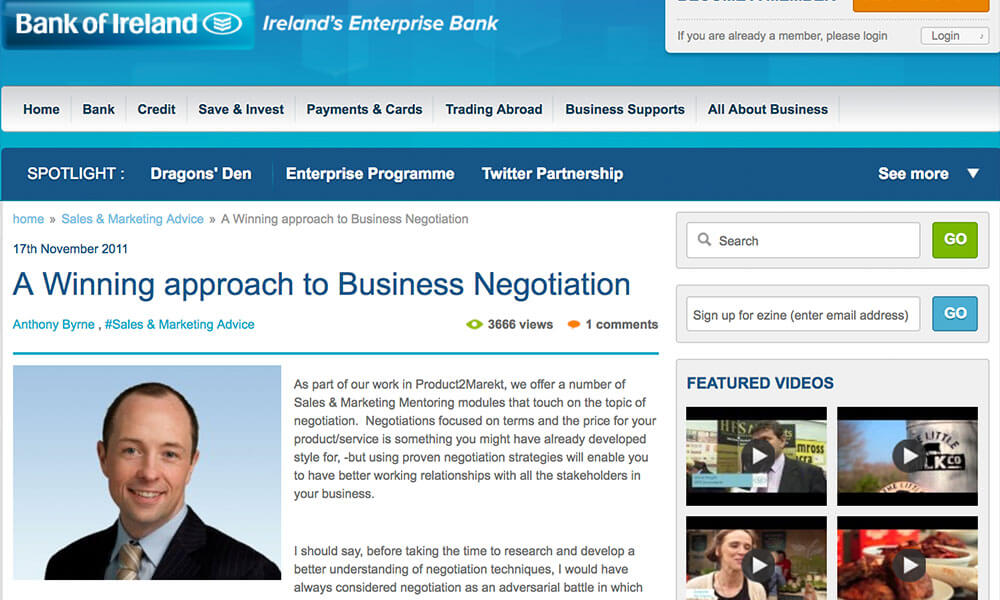 I was asked to write a piece for Bank of Ireland’s Business Community Site – AllAboutBusiness.ie. I wrote something on the topic of negotiation which was published here.

As part of our work in Product2Marekt, we offer a number of Sales & Marketing Mentoring modules that touch on the topic of negotiation.  Negotiations focused on terms and the price for your product/service is something you might have already developed style for, -but using proven negotiation strategies will enable you to have better working relationships with all the stakeholders in your business.

I should say, before taking the time to research and develop a better understanding of negotiation techniques, I would have always considered negotiation as an adversarial battle in which one side would triumph and the other would concede.  In fact, I would say that in between pitching a concept and entering into pricing negotiations my overall demeanour would change.

Sometimes I won and sometimes I lost, but overall my old approach seemed to produce inconsistent results. I decided to research into some of the most widely used negotiations strategies and tactics.  Through the research, I discovered a number of reoccurring themes which most authorises were citing on an ongoing basis.

Firstly and most importantly, I realised that my overall attitude to negotiations between two opposing parties wasn’t optimised.  I hadn’t considered that between two opposing negotiating parties, a Win / Win outcome was possible through a different approach.  What I hadn’t before took time to consider was the other side’s objectives and desired outcomes.  Not to mention the people element – I had wrongly assumed that everyone shared a “My Way or the Highway” or “Gladiatorial” approach.

Having completely changed my approach, I now enjoy better outcomes, stronger relationships from the negotiating parties and very constant results.  From research and practice, I would suggest that nearly all Winning Negotiations have three components.

People
I suggest that it is critically important to first consider the people element in your negotiations.   Understand that your counterpart will have a clear manifesto ahead of your negotiation dialogue.  Your counterpart will view his/her success by how close the outcome is in line with their manifesto.  Perhaps it’s getting a certain price point, a particular payment term or a specific service level – it’s important to identify the manifesto and to discuss why it’s being sought before ruling it “In or Out”. It’s also important to have clear, your own manifesto ahead of any negation. For me, I also had some work to do to change my view on what negotiation success is.  Now, I think a happy medium between getting what “I want” and what “I need” from a negation to be a successful outcome. So, until you know why and where the other side is coming from (by way of their manifesto) – you just can’t deliver a WIN / WIN outcome.

Problem
So now for the fun part, once you have clearly understood the other side’s manifesto and know how far you can move from your opening gambit (opening position) its time to start making suggestions on how best to meet somewhere in the middle.  On average 65 – 70% of negotiations are based on price and value. So let’s assume you are the seller in the negotiation.  At this point, the time is right to be creative about ways of creating value for yourself if you are to consider reducing the price to deliver a WIN / WIN outcome.  Tactics I have used to create value are conceding on a price point:

As I said above, it important to be clear in your own manifesto, how far you can move and where your “red line position is”. Knowing this ahead of time will allow you to demonstrate to the other party your willingness to move towards a WIN / WIN outcome.

Process
This is where you need to consider the mechanics of the negotiation, who will chair it from your side? How many people will be in the other side’s negotiation party?  What is the venue – is it on your site/their site?  If possible try and have negotiations in a neutral environment so that power is equal. Also, try and match the energy in the room, try to have the same number of people in your negotiation party as the other side does.

Is there anything tangible you should bring to the negotiation that will support your manifesto (a breakdown of your costs etc)?  If you can show supporting evidence to justify your position, you are going to be able to better defend your position. To strengthen your hand, it’s also worth being able to demonstrate that you have considered your options if the negations fail. The best impression to create is one whereby you hope to reach a successful WIN / WIN outcome, but if it can’t be reached that both you and your business will survive and prosper regardless.

In closing, I would suggest that trying to convey that your motivation is to “bridge between your position and the other party’s position” is a better strategy than adopting a hard-liner unwilling the move from opening gambit type of negotiator. Countless Physiologists have written and documented to the effect, that Human interaction is based on giving and receiving. By demonstrating your willingness to move from your opening position based on the understanding of the other party’s manifesto should encourage a willingness to reciprocate movement allowing you to gain more value and deliver your negotiation to a WIN / WIN outcome.

As part of our expansion plan, Product2Market did a small press and public announcement. We…

Huffington Post Blog: “A Juice Fast for a Fast Life”

I would never have considered myself unhealthy, at least by today’s somewhat lax standards. I…